Spook Hill is a gravity-defying hill in Lake Wales, Florida

Magnetic Hills, Gravity Hills – those odd places where objects such as automobiles mysteriously seemingly defy the laws of nature unexpectedly pop up in most every region across America. Gossip, rumor and word of mouth are the general rule of thumb in discovering their locations, and they’re generally visited by inquisitive folk looking for the strange or unusual. Spook Hill,

however, is somewhat unique as it is officially recognized by the town of Lake Wales, and prominently marked, promoted and accepted by the community. The Elementary School nearby is named “Spook Hill Elementary” and they have even adopted “Casper, the Friendly Ghost” as their mascot.  The town has placed a large sign on North Wales Drive explaining “The Legend” and how to experience the effect.

“Many years ago an Indian village on Lake Wales was plagued by raids of a huge gator. The Chief, 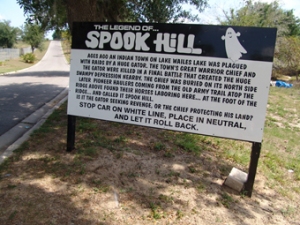 a great warrior, killed the gator in a battle that created a small lake. The chief was buried on the north side. Pioneer mail riders first discovered their horses laboring down hill, thus naming it “Spook Hill.” When the road was paved, cars coasted up hill. Is this the gator seeking revenge, or the chief still trying to protect his land?”

The sign explaining the “Legend” also gives specific instructions. Pull up to a white line in the road, put your car in neutral, and you will drift backward “up” the hill. Not only do cars roll up hill but also soda cans, oranges, or anything else that is round.

Spook Hill has been written up in many publications over the years, appears on some maps of the area and was even once mentioned in the Wall Street Journal. Once you are in Lake Wales, watch for the small brown signs that point out where to make turns as it is definitely off the beaten path.

There are several folk stories about Spook Hill and how it was discovered. Some versions say that the hill was a sacred spot used by early Native American for religious ceremonies. Historical accounts from the area talk of early pioneers noticing that their horses had to struggle hard to go down Spook Hill but found it easy going up the hill.

The most popular account has to do with a gentleman who parked his car at the base of the hill to slip off and do a little fishing in a nearby lake. He had barely reached the lake when he turned and saw his car rolling up the hill. He decided right then and there that it was the doing of “haints” and he wasn’t about to wait around and see what they would get up to next! Not surprisingly, that curious little story spread like wildfire throughout the community for years and has eventually found its way into the local folklore.

So, is it haunted? Are there gigantic magnetic forces at work here?  Is this the spot where the moon is closest to the earth and exerts the most gravitational pull?  Is it linked to the Bermuda Triangle?  Why then is this the place where the laws of physics and nature go haywire?  Maybe its just an optical illusion…  Whatever your explanation is – it is an enjoyable, fun and curiously interesting destination on the Great American Road Trip

Lake Wales is located about halfway between Tampa and Orlando on Interstate 4. Spook Hill is easy to locate since it’s marked by a huge sign. It is located on North Wales Drive off Highway 27.