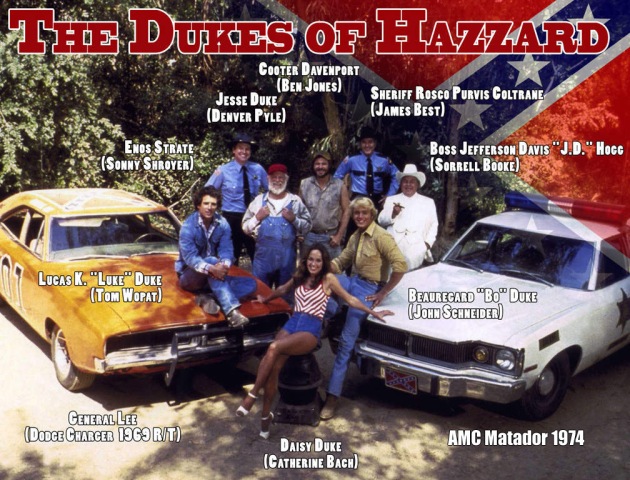 never quite got the hang of that - I always wound up rolling in the dirt on the other side...

There…that pretty much sums up the entire series, doesn’t it?

them. They raced around Hazzard County, Georgia in a modified 1969 Dodge Charger RT, jumping rivers, trying hard to stay on their best behaviour (as they were on probation) and stay one step ahead of the “law”…so the “good ol’ boys” were also “bad boys”, making them even more intriguing to their audience 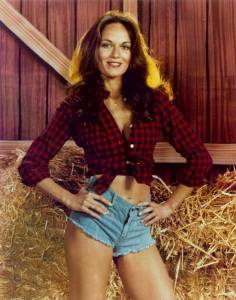 Daisy Duke in her "daisy dukes"

From 1979 thru 1985 (except for most of the ‘82/’83 season…which was the infamous “Coy & Vance Duke” season), both Tom Wopat and John Schneider were every teen-aged girl’s poster boy.  In addition, cousin Daisy ( Catherine Bach) was famous for…well…nothing, really, other than wearing short shorts and showing off her, ummm, assets.

Everybody in the cast seemed to get their chance in the spotlight, with the evil J.D. “Boss” Hogg and the inept Sheriff Rosco P. Coltrane, and of course everybody’s Uncle Jesse (Denver Pyle) being extremely popular characters, and even the secondary character of Deputy Enos Strate (later Sheriff Enos) getting his own spin-off program once the series ended.

With astute merchandising, video games, movie remakes and syndication of the program, along with a great theme song (thanks to Waylon Jennings) the popularity of the Duke Boys continues to grow over time. But if you happen to sit back and watch the show today, you’ll totally understand why it’s considered one of my all-time guilty pleasures.

I'm thinking maybe its time to start packing a lunch for work...